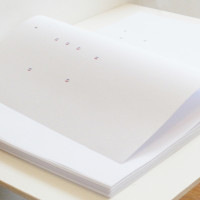 Trust me I trust you is a project which was created in response to major corruption scandals that have affected a complete Croatian government and led to arrestments of now ex-prime minister and several high-positioned politicians and ministers. This work deals with the trust that citizens have given to politicians. The project consists of five art books – legal documents of the Croatian Government that I have transformed into an artistic language. These books are 5 different Treaties that Croatian government was refusing to publish. Through visualization I am questioning how the average citizen who does not understand the legal language is reading these documents – probably as hard as my documents. Through my visualization I raise the question of whether citizens should have the knowledge to control politicians or they should simply trust them.